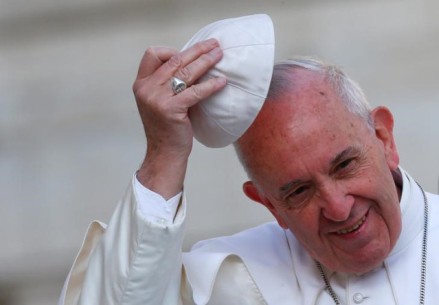 The Crusader Journal reported that  VATICAN CITY (Reuters) – Pope Francis flies to Cairo on Friday, less than a month after church bombings killed 45 people in two Egyptian cities as part of a concerted campaign by Islamist militants to rid the Middle East of Christians.

Home to some of the faith’s earliest churches, the region’s Christian communities have been in decline for decades, but wars this century in Iraq and Syria, and the emergence of Islamic Stat have put their future in doubt.

Francis said on Tuesday he hoped his visit could be a “consolation and … encouragement to all Christians in the Middle East”. He also wants to improve dialogue with Islam.

“The pope is very conscious of the fact that the Middle East may lose its entire Christian presence,” said Nina Shea, the head of the Center for Religious Freedom at the Washington-based Hudson Institute think tank.

“These are ancient communities that have their roots in the earliest Church. They aren’t grafted on, or the result of Western evangelization. They are unique and they are being lost,” she told Reuters by telephone.

The largest exodus has been in Iraq, where Christians were caught up in the sectarian violence that wracked the nation following the U.S.-led invasion in 2003 and then actively persecuted as the Islamic State grew in power from 2014.

As Islamic State, also known as Daesh, started to seize towns and cities across Iraq, they ordered Christians who fell into their clutches to convert, pay a tax or face death.

Those Christians who could, fled abroad or to Kurdish-held areas in the north. They appear highly reluctant to return to their old homes even as Iraqi forces gradually retake lost territory, including large swathes of the city of Mosul.

“Daesh were people from Mosul, there were friends, people we know,” said Kharallah Jamil, the Christian owner of a construction company who escaped with his family to the Kurdish city of Erbil after Islamic State forces seized his property.

“I can’t say whether we will go back. We were betrayed. People in Mosul were cooperating with Daesh, following their interpretation of Islam.”

WHAT ARE YOU LOOKING FOR?

WHAT ARE YOU LOOKING FOR?Can you tell us what you are looking for?Oh… Is it POWER?If that is all Babalola had search for in God, no church that dishonored him will remain in his time.BUTBabalola never allowed power to dominate his mind than his allegiance to God. What are you looking for?Is it FAME?If that […]

How To Know Who To Marry – Apostle Joshua Selman Nimmak

There are no physical formular provided in finding a spouse,but there are scriptural guidelines, there is no physical formular in the Bible, the Bible scatters guidelines….. And I have been able to connect five scriptures, that if you use them,they could guide you in making a Godly decision…..are you ready koinonia. Firstly is proverbs 18:22……look […]