No doubt that Character has been judiciously defined by our two speakers. So, we won’t dwell much on the definition of character but the place of character in the fulfilment of destiny as relates to Plans, Purpose and Pursuit

You can not run on one leg of destiny and go far in life because life is not a Sprint, life is a Marathon
This is why God always considers Character in His place of Plans, Purpose and Pursuit 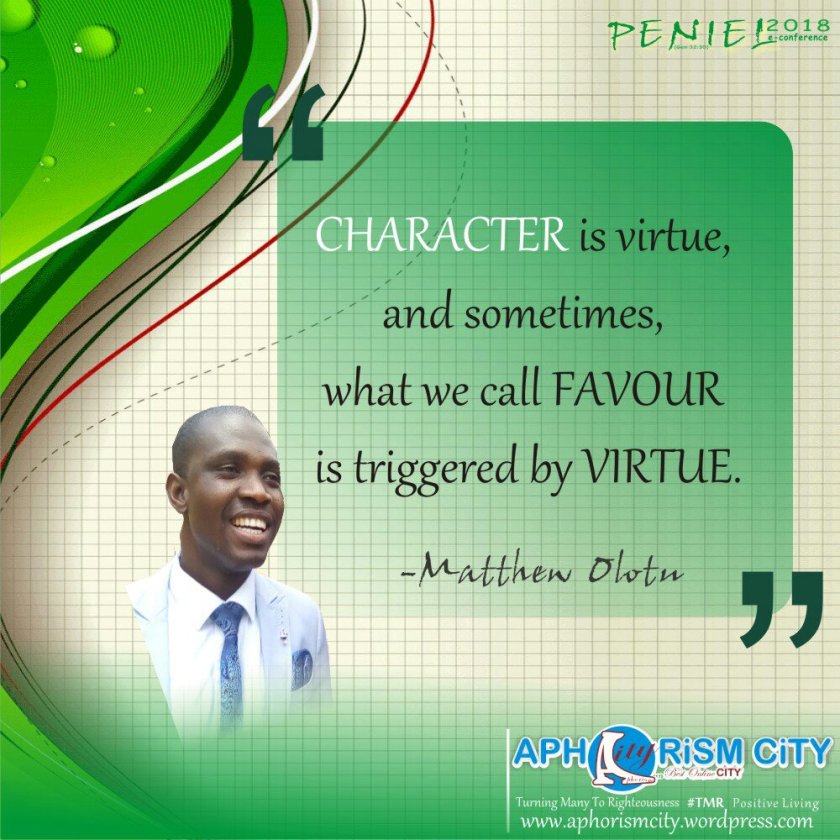 Exodus 18:21 Moreover thou shalt provide out of all the people able men-(CAPACITY), such as fear God, men of truth, hating covetousness(CHARACTER); and place such over them, to be rulers of thousands, and rulers of hundreds, rulers of fifties, and rulers of tens

Acts 6:3 Wherefore, brethren, look ye out among you seven men of honest report(CHARACTER), full of the Holy Ghost and wisdom(CAPACITY), whom we may appoint over this business.

Therefore, for our Plans, Purpose and Pursuit to be most successful, Character is a must!
First of all,
let’s define the word CHARACTER

Character can be defined as one’s behaviour.
So, character defines a man (Job 1:1).

Character is the engine room of a great destiny.

Character gives value to your plans, purpose and pursuit

Character is what gives your plan great result.

For me Character is Key.Samson lost it because of Character,Judas lost it because character was missing.Many great men of God hove lost it in ministry because the anointing was not coupled with good character.
Destiny and purpose is like a plan sheets without anything written on it.

Character is the link to destiny and purpose.

Men like Samson and king Saul have a great and enviable destiny. But lack of the ink of Character their plan sheets were just misused. (Judges16:17-21, 1sam13:13-14.)

Character from this view is defined as a true reflection of a man’s secret, that showcases his shame or fame in the public.

Therefore, in the place of our Plan, Purpose and Pursuit, the following Character must be put in place:
boldness, focus, humility, maturity and wisdom.
Case study of Joseph.

1) Boldness– Joseph was ever
bold because of his strong character. Which lead him of speaking about his destiny as early at his young age. Gen37:2-11,

3) Humility– Joseph maintained humility so as to attract attention of his father, brothers, Marchant men, Potiphar and the prison warden that led to his final destiny. Gen37:2,23-36. Gen 39:22-23.

4) Maturity: the character of Joseph place his destiny and purpose in the right direction. Maturity to handle his brothers attitudes in the field and the butler and chief Baker in the prison, made his destiny ever clear. It takes a sound character to achieve this goal.

5) Wisdom– character unveil the destiny and purpose of Joseph. Which finally tested the wisdom of God in him. Gen 41:14-42.
In all character is a debt we owe to actualise our God given destiny and purpose.
Destiny is God’s programme for us and in us conceived in the womb of time and ordained for delivery phase by phase.

Importantly, we need very prayer-boosted robust relationship with God to ever see the actualization of our destiny – Hab. 2:1-4 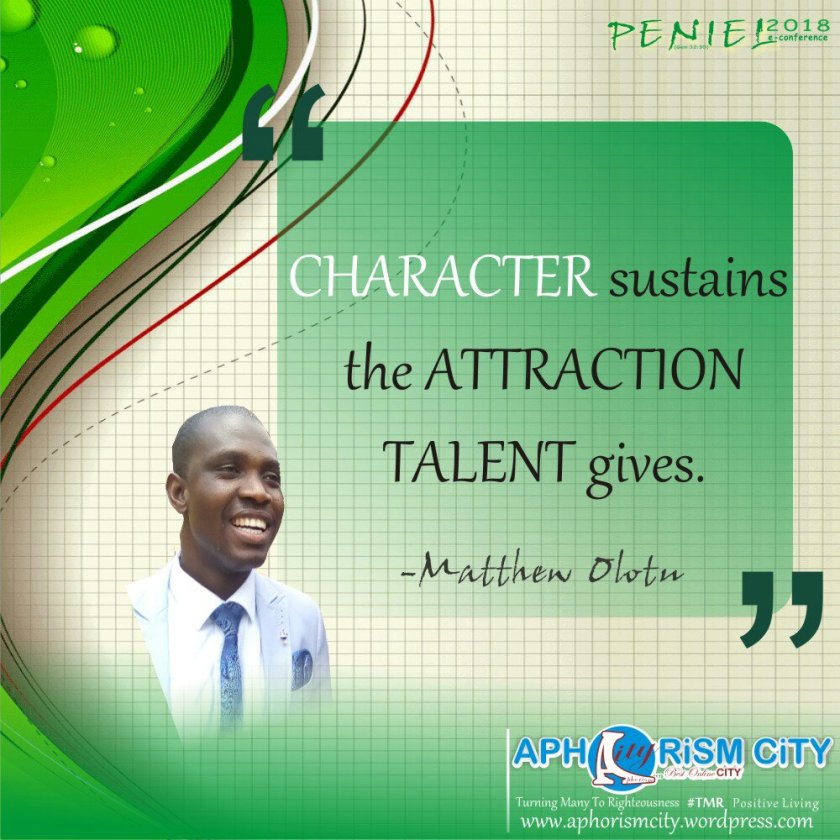 However, we don’t need prayers solely, we are told to add to our faith, virtue…which connotes character……2Pt. 1:5-10
Noticing the scripture above, every other things to add to Faith are character-rooted.

So this is why Faith comes first but Character forms the rest of the actualization of our glorious destiny.

The truth is Sometimes we Need CHARACTER, Not Prayer to experience destiny progress.

No matter how we pray, attitude has its place.

This the strong truth a lot of Christians fail to understand.

Prayer is good, but prayer isn’t the answer to everything.
Somewhere in the scriptures, the Bible says that before we pray, he will answer..
Why?
Because we’ve exhibited attitudes that will attract miracles that is God has seen in us true love for one another.

A man with pure heart attracts God’s blessing without binding and casting demons.

People, sometimes pray for miracles to happen, when what they actually need is character, not prayer, not speaking in tongues.

God is Spirit, but blesses and operates you, through man.

If one lacks good relationships with men, such will hardly be blessed.
God works with relationship.
And we must learn to treat people with courtesy..

The Shunammite woman must have been praying for a child all through her life.
I’m sure.
She was a prominent woman and surely she had money but couldn’t buy a child.

What made her have a child?
She took care of Elisha, a man of God.
She respected him,
she was hospitable,
she was kind,
she had character!

Elisha, spoke into her womb and in a year, she had a child.

Assuming she wasn’t hospitable?
Polite, and kind?
She would’ve still been praying and fasting,
binding and casting demons that don’t exist.

Sometimes, we are our demons. Our attitudes are our destiny killers.

Some persons have insulted people that were divinely orchestrated to help them.
Some are keeping malice with their
destiny helper..

Talent is attractive.
Anyone can be talented, but character is a proof of discipline. A proof of responsibility.
Character sustains the attraction talent gives.

Character is virtue, and sometimes what we call FAVOUR is triggered by virtue.

Mary was a Virgin.
She had virtue!
Which attracted the favour of being the mother of the Saviour of the world!!

In our thy getting, get character..
Respect people.

Treat strangers with courtesy..
Be kind..

Our Angel won’t always come like an Angel..
So we look down on nobody, anyone can change our life.

It was the maid of Naaman, that told him where
to get healing. Naaman was a great man but
had leprosy. He must have visited the greatest
hospital in the world as of that time. Who
would’ve ever thought that the solution to his
problem was in the mouth of his maid?

Sometimes the solutions of our problems are
trapped in the mouths of mere people, but many of us are not humble enough to see it.

Prayer is not all.
Build relationships.
God will use man.
Respect people.
Get character.
And we will see God and Destiny gets fulfilled in grandstyles by the day.
In sum, who you are (character) is more important than what(position) you are.
Don’t just grow old, grow up because what you don’t deal with today will deal with you tomorrow.

Let me conclude with the statement of one wise man which says:

You may be Solomon in Wisdom or David in Praise or Abraham in faith or Joshua in War But if you are not Joseph in Discipline , you will End up like Samson in Destruction ………

None of us will fail destiny in Jesus Name! 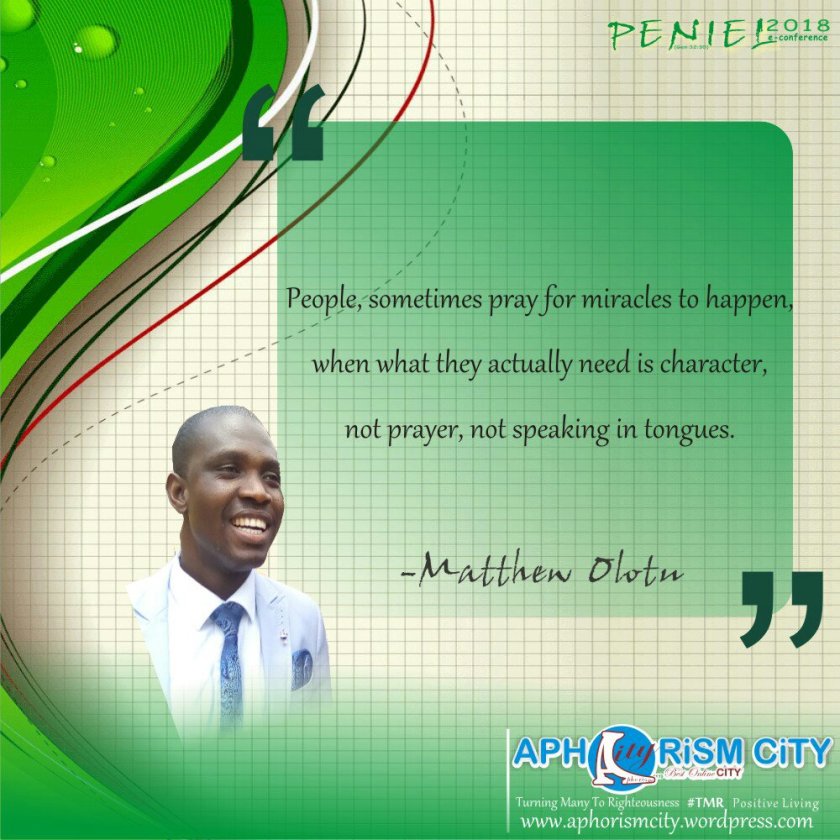 I Used To Be Timid To Preach Until God Arranged An Event That Launched Out MFM – Dr D. K Olukoya

Although his preachings reverberate manifestations of fire and thunderbolts, not many would ever imagine that Dr Daniel Kolawole Olukoya, General Overseer, Mountain of Fire and Miracles Ministries, was often timid and fearful when it comes to preaching to people of other races especially whites.But, this was many decades ago in his younger days prior to […]